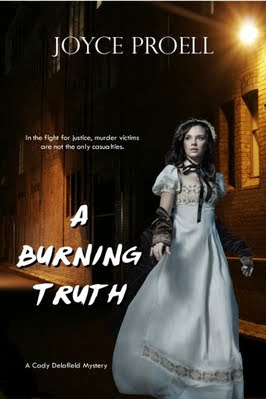 In 1881, the air in Chicago is rife with worker discontent, yet business titan Doyle Flanagan is hopeful for the future. He looks forward to a lifetime of peaceful bliss with Cady Delafield and leaving the wretched past behind. But his life is once again thrown into disarray when his office is vandalized and the night watchman murdered. Clues lead to a powerful organized labor movement. Targeted in the press as anti-labor and with a big rally staged next door to his offices, Doyle must uncover the culprits before his wedding plans and his livelihood go up in smoke. Plagued by memories of four brutal deaths, school director Cady Delafield is determined to drive the recent tragedies from her mind and enjoy being courted. Although his commanding personality threatens to overshadow her, Doyle Flanagan is the most dynamic man she’s ever met. When another tragedy unfolds placing him at the center, she takes action—action that could shatter her future.


“Miss Delafield?” The young police officer’s cheeks were rosy from the cold, and she had a sudden urge to invite him inside for a warming cup of cocoa.
“Yes, this is Miss Delafield,” Doyle responded before she could even find her voice.
“I’m Doyle Flanagan. What’s this about?” Within seconds he’d gone from brooding to his customary take charge mode.
“Inspector Dinsmore asked me to find Miss Delafield.” The boyish officer swung a look at her. “He’d like you to come to the police station. He requires your help.”
“Oh my.” Cady’s hand fell across the sudden nervous ripple in her stomach. “Did he say what it’s in regard to?”
“No, ma’am. He’ll explain when you get there. I’m to take you straight away. I have a cab standing by.”
“Go ahead, officer,” Doyle replied, issuing orders in his usual effortless, decisive way. “I’ll accompany Miss Delafield to the station.”
The policeman saluted as if Doyle were his superior officer then turned on his heel and jogged back into the shadows. She noticed the hack lurking beneath a street lamp a short distance down the block. “Whatever can it be?” She shot a worried glance at the lit windows in the mansion. “Do you suppose something happened to my family?”
“It didn’t,” Doyle said clasping her elbow and handed her back into the carriage. “Dinsmore would have come personally if it was bad news.”
Spoken with utter assurance, his confident words gave her a moment’s respite from her escalating unease. Despite the warmth from the brazier near her feet, her teeth began to chatter.
“Perhaps Dinsmore knows something about young Robbie Finnegan,” he said.
If so, why send for her? The summons made no sense and none of the possible explanations rootling in her head sounded good.
“Don’t be afraid.” Doyle squeezed her hand and the firm pressure yielded the strong comfort she craved. She fought to reign in her imagination in which all sorts of horrific things like explosions, burglary, accidents and death took place.
“No matter what happens,” he said softly stirring some deep emotion. “I’m at your side.”
If she had any doubts about whether she could cope with any further adversity they were swallowed in a gush of bubbly, tender feelings.

I always like to start a series by the first book, obviously. That makes me feel closer to the characters and deeply know their personalities. Especially when they are captivating.

Cady and Doyle are just like that. Two strong characters that fate - and tragedy - eventually put them together.
Doyle is deeply in love with Cady and is going all out to woo he , but it seems that tragedy goes riding behind him.
When everything seemed to go well, another mystery falls on his head. Someone broke into his house, stole some of the books, a few dollars and killed his night watchman. And again the police inspector suspects that Doyle committed the murder. And again Doyle realizes that if he wants to leave innocent of all this confusion, he will have to investigate on his own.

A full of mystery, drama, suspense and romance book, because everyone likes a romance.
The ending is surprising and makes you love and hate certain characters with the same intensity.

A great read for your weekend . 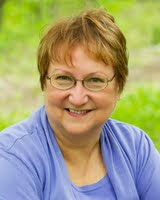 Joyce grew up in Minnesota and attended college and grad school in Chicago. After working in mental health, she retired at a young age to write full-time. Her first book, Eliza, was published in 2012. A Burning Truth is the second in the Cady Delafield series. When she isn’t writing mysteries or historical romances, she loves to travel, walk, read, and do crossword puzzles. She and her husband make their home in rural Minnesota in her very own little house on the prairie.