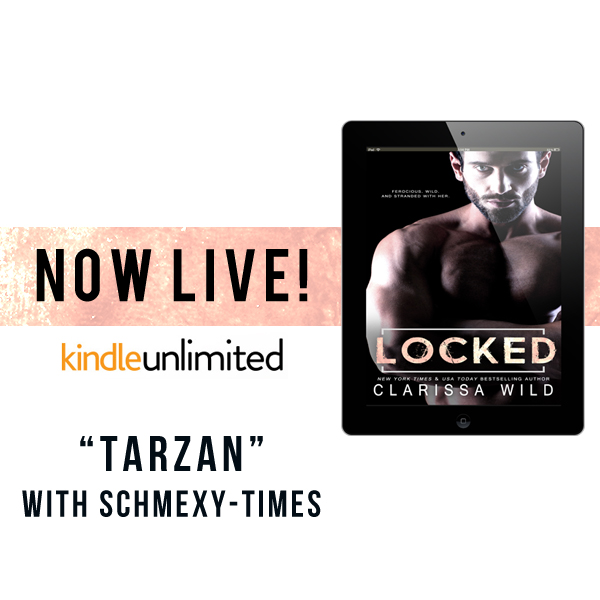 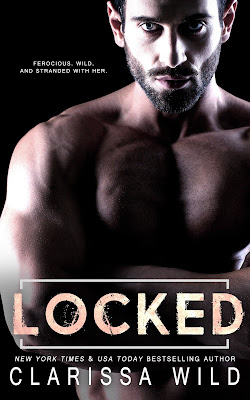 A new romance by New York Times & USA Today Bestselling Author Clarissa Wild!
People say I'm ferocious. Wild. Dangerous.
They're right. That's why I live on an island alone.
The jungle is my home. My personal prison.
Until she arrived.
The moment her helicopter crashed on my land, everything changed.
She's the only survivor ... And I'm keeping her locked up in a pit.
It's been too long since I last touched a woman, especially one so beautiful.
It makes me hunger for her.
I want her ... So I'll keep her ...
And I'll make her mine.
LOCKED is a full length standalone, complete at 70000 words. No Cliffhanger. Bonus content included.

"I ADORED Lock. He is all kinds of wild and savage" - Books N Wine Blog

"It was like a modern day Tarzan, and he was one sexy jungle man!" - Shelli's Goodreads Review

"He was hot. He was alpha. He was hung like a horse." - Between The Bookends 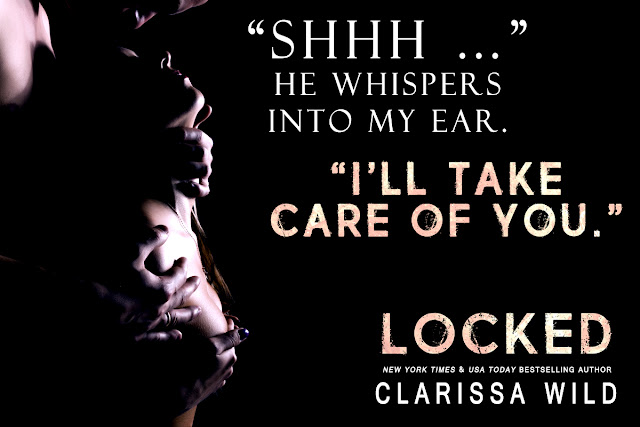 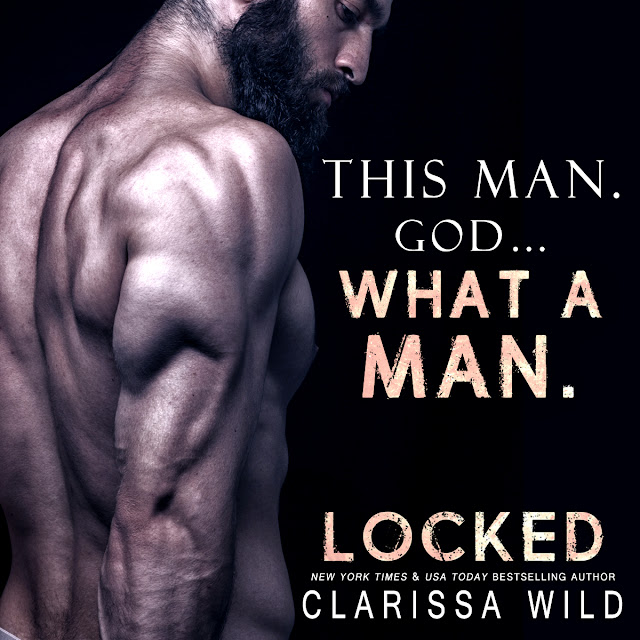 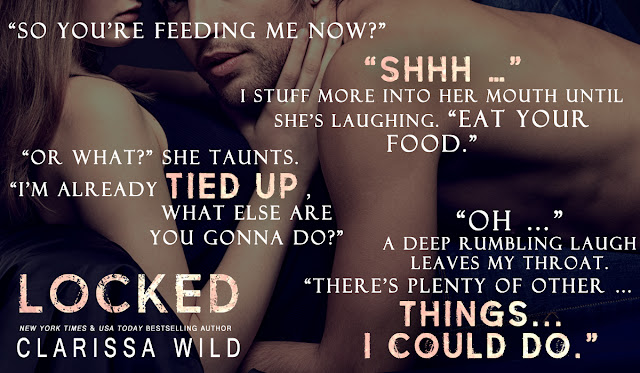 He nods again and points at the shower. “Go on then.”
“What? Now?” I say, looking down at myself. I’m still dressed. “I don’t want my clothes to get wet.”
He shrugs. “Then take them off.”
My lips part, but I have no idea how to respond.
All I can do is stare in amazement.
Did he actually just tell me to take off my clothes?
“What?” I repeat, for clarification.
“Take ’em off.”
He’s serious. He’s dead serious, and that stern stare almost makes me want to do it.
But no, my morals have to get in the way again.
“No,” I say, folding my arms. “I’m not going nude …”
He frowns and shrugs again. “Suit yourself.”
He seems genuinely disappointed as he turns back around again. As if he’s upset that I won’t try his makeshift shower even though I want to. I just can’t … not when he’s watching.
“I’ll do it,” I say.
He stops in his tracks and glances over his shoulder, waiting for more.
“But you can’t watch,” I add.
His shoulders rise and fall, and he gives me a quick nod. “I’ll be down there.” He points at the small lake. “If you need me.”
“Yeah …”
Wait, do I need him? No. Maybe.
Fuck. I don’t. I don’t know anything anymore.
I peek at the shower, but my eyes still revert to him. And they stay there … glued … because he’s untying the rope around his waist.
And the banana leaves drop to the ground.
My eyes widen.
Butt naked and in its full glory.
Cheeks squeezed together, thighs muscular and thick.
And an enormous dick dangling between his legs.
I struggle to keep my tongue inside … struggle to even breathe properly.
Until he glances my way.
In shock, I quickly dive behind the wood and grasp my chest. As if that will help me from having a heart attack after being caught staring at a naked man.
And what a man he is … Wow. I still can’t get that image out of my mind, and I don’t even wanna try. All I can do is grin as I start undressing, wishing I wasn’t so easily persuaded to ogle a man because of his dick.
But Jesus Christ … that dick.

Lock and Cage. Raised to be fighters. Almost animals.
Lock, the eldest, in his time as a prisoner, could  leave his cage to see the world sometimes, but his hunger for friendship and company was enormous. Exactly so he ended up getting involved in an episode in which he became a fugitive from the police.

Years ahead, Lock was well living alone on an island. But a helicopter crash brought to him the person who would become his mate.

Juliet Baker joined an expedition whose experimental phase would be done in loco, on an uninhabited island. But an accident kills the helicopter pilot and, in the fall, only she survives.
Dumbfounded by the shock, she finds herself in the arms of a rustic and strong man, and some time later she discovers that he and wild animals were the only inhabitants of that island.

The only thing that goes through Juliet's mind is to return to civilization, but for some reason, Lock doesn't think like her.
He knew human beings, he saw their greed and selfishness. He saw what they are capable of. What HE could do for being forced to fight and kill.

On the other hand, he wanted Juliet to stay with him forever. There, they could be a happy family. But how, without running water, energy, medicines?

But a tiger attack and the appearance of a boat give them the chance to return. Lock is taken to the hospital. Juliet finds herself in love.

But could she convince him to live in the city?
In love, Lock wants to do anything to make his Juliet happy, but could he withstand the pressure of living among other people?

This book - stand alone - is also the sequel to CAGED.
(Cage - review > here) 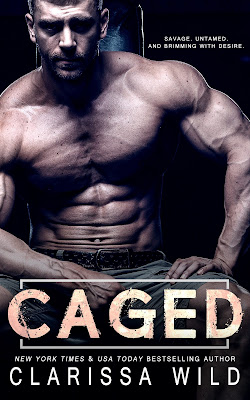 Clarissa Wild is a New York Times & USA Today Bestselling author, best known for the dark Romance novel Mr. X. Her novels include the Fierce Series, the Delirious Series, the Stalker Duology, Twenty-One (21), Ultimate Sin, Viktor, Unprofessional Bad Boys, RUIN, the Indecent Games Series, and FATHER. She is an avid reader and writer of sexy stories about hot men and feisty women. Her other loves include her furry cat friend and learning about different cultures. In her free time she enjoys watching all sorts of movies, reading tons of books and cooking her favorite meals. Want to get an email when my next book is released? Sign up here to receive 4 FREE short stories: http://eepurl.com/FdY71 - Join Clarissa's Fan club today: https://www.facebook.com/groups/FanClubClarissaWild 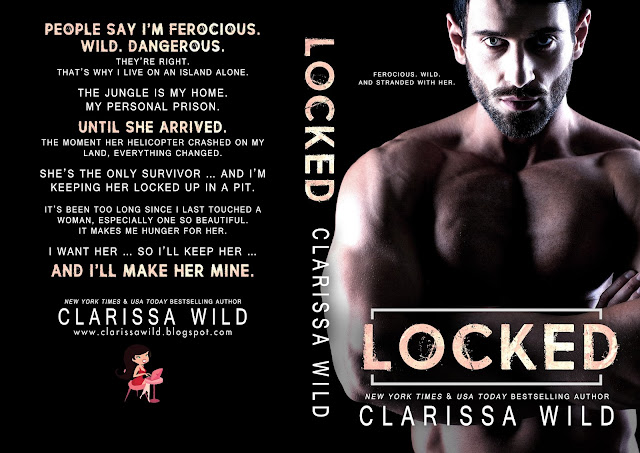