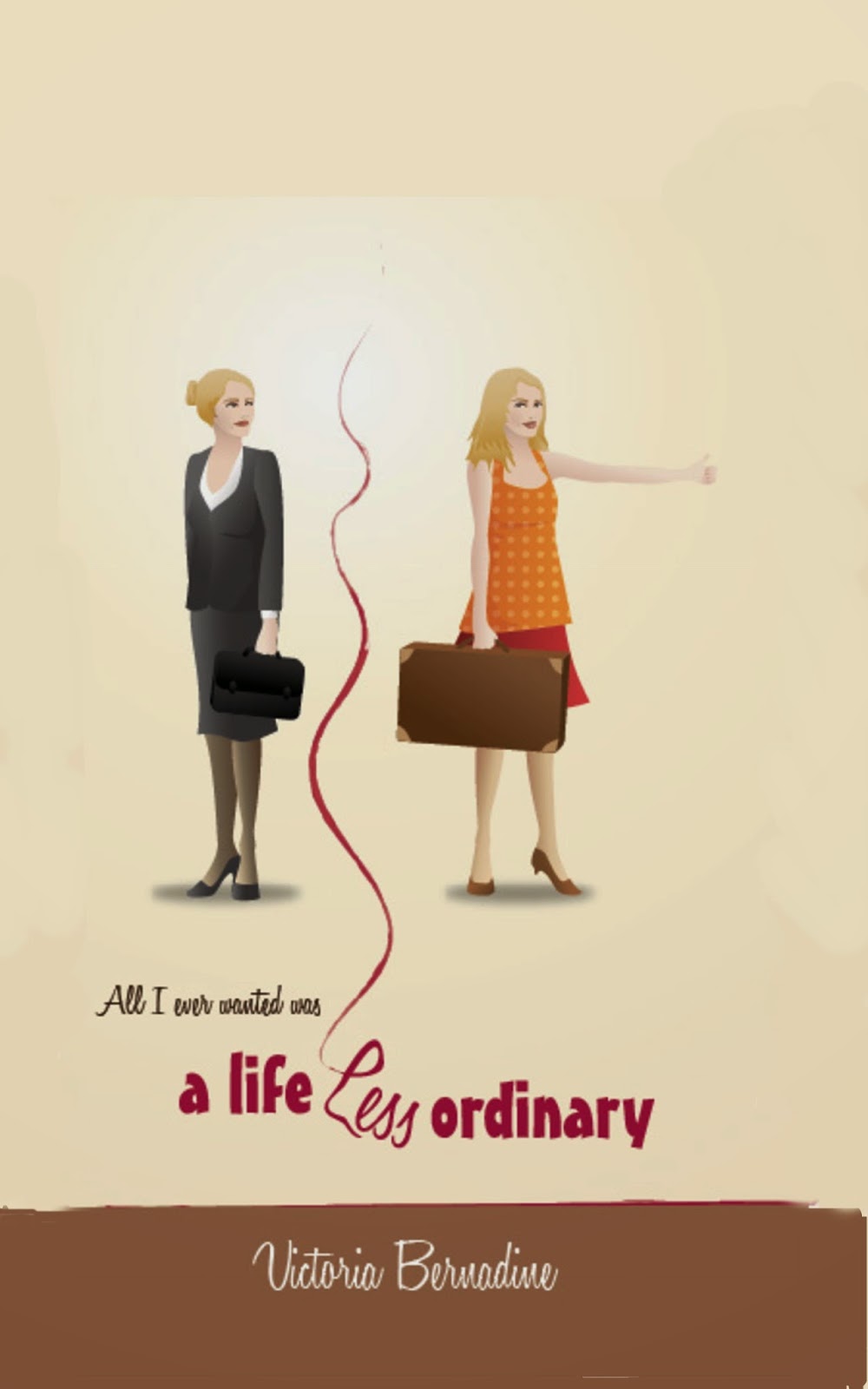 For the last fifteen years, Rose “Manny” Mankowski has been a very good girl. She turned her back on her youthful fancies and focused on her career. But now, at the age of 45, she's questioning her choices and feeling more and more disconnected from her own life. When she's passed over for promotion and her much younger new boss implies Manny's life will never change, something snaps. In the blink of an eye, she's quit her job, sold her house and cashed in her pension, and she's leaving town on a six month road trip.

After placing a personal ad for a travelling companion, she's joined in her mid-life crisis by Zeke Powell, the cynical, satirical, most-read – and most controversial – blogger for the e-magazine, What Women Want. Zeke's true goal is to expose Manny's journey as a pitiful and desperate attempt to reclaim her lost youth – and increase his readership at the same time. Leaving it all behind for six months is just an added bonus.

Now, armed with a bagful of destinations, a fistful of maps, and an out-spoken imaginary friend named Harvey, Manny's on a quest to rediscover herself – and taking Zeke along for the ride.

“All I ever wanted was a life less ordinary.”
Manny lay flat on her back, eyes wide, staring at the ceiling while she waited for her clock to hit 6:00. Another day of work, she thought. Another day older and deeper in debt.
She had the alarm timed to the millisecond. The jarring noise had barely begun when she clicked it off. She sighed then threw back the covers and got out of bed.
She padded into the bathroom, glanced without interest in the full-length mirror that doubled as her shower doors and took her morning inventory.
Plain face? Check.
Looking tired? Check.
Thirty pounds overweight? Check.
Dark circles under deer-caught-in-headlights eyes? Check and check.
She shook her head at her limp, mousy hair and wondered when she’d gotten so old.
She sighed in resignation then conjured up her Perfect Fantasy Man–or Harvey, as she liked to call him–to give her a morning lift. She cocked her head to one side as she stared into the mirror and imagined him standing behind her. She smiled at the handsome man, and he smiled back, putting his hands on her shoulders. Everything about him was warm, in stark contrast to the cold shades of grey in which she lived her life. He had warm brown eyes, warm brown skin, and a warm smooth voice that always reminded her of golden honey. Today his hair was black with greying temples, and yes, even that seemed warm to her.
He was perfect, everything she considered ideal in a man–and extra-perfect, of course, because he was a fantasy. Just the thought of trying to establish a relationship with an actual man felt too much like work.
She sighed and Harvey disappeared.
“Instead I ended up in a rut–everything planned and executed to the minute.”
She finished her shower and padded out to the kitchen wrapped in a worn terrycloth robe just as the coffee pot finished perking her morning coffee. She pulled a white cup out of the cupboard, filled it and took it with her to the bedroom, where she drank her coffee while she dressed and pulled her hair into its habitual bun high on the back of her head. At 6:45 sharp, she was back in the kitchen where she rinsed out the cup and put it on the rack next to the other three cups from earlier in the week; they marked the passage of time like scratches on a prison wall.
She walked out the door at 6:55 as usual, called good morning to Mr. Abinash from next door, as usual, got into her car and drove to work. As usual. She walked in at 7:37, called good morning to those of her staff already at their desks, and settled herself in her office.
As usual.
She sighed silently as she logged on to her computer and realized she couldn’t remember the last time she’d had a sick day or had come in late. Even her car and traffic and the sometimes-harsh Edmonton winters had given up trying to throw off her schedule.
She sighed again as she rifled through her stacks of paper, searching for the information she needed to review before the staff meeting at nine. The last staff meeting before their new boss arrived at ten, and Manny went back to her old position. She’d enjoyed being the boss and thought she’d had a good chance to win the promotion. If she was honest with herself, though, she hadn’t really been surprised with the decision to offer the job to Steph. If she had the energy, she’d almost wonder why she didn’t even care that much.
“I told myself it was security. But all I was doing was sleeping with my eyes open.”
Manny glanced up as her assistant energetically bounced in.
“Morning, Manny.”
“Morning, Roxie. How was your evening?”
“Great–went to that new Robert Downey Jr. movie–rrrooowwwrrrr! Phil wasn’t too impressed with my drooling though.”
Manny laughed. “I’d expect not. I guess I need to go see it then.”
“Yeah, sure. When was the last time you actually went to a movie in the theatre?”
Manny paused, considering the question then shrugged carelessly. “Can’t remember, actually.”
Roxie shook her head in exasperated fondness and sat down in front of Manny’s desk. She leaned forward and lowered her voice. “So, the new boss starts today?”
“Yep,” Manny replied absently, reviewing the e-mails in her inbox.
“Are you going to be okay with this? I mean, you–”
“Of course I’m okay with it. Steph’s a nice person, bright, energetic, competent, levelheaded, full of new ideas. She may have a bit of a learning curve ahead of her, but she’ll do just fine. She may be just what we need around here. Perk us up a bit.”
“Yeah, but you–”
Manny took her hands off the keyboard and turned to face Roxie directly. She gave her a reassuring smile and calmly held her gaze.
“I’m okay with it,” she said. “Really. I didn’t want to be the boss anyway.” She paused then continued. “Everything’s going to be fine. You’ll see. A new boss will be fun!”
Roxie grimaced cynically and Manny shook her head in mock disapproval.
“We should get to work,” she urged gently.
Roxie nodded and stood. “Yeah, that at least never changes. But Manny...”
Manny raised a quizzical eyebrow.
“It should’ve been you.”

Review:
Manny is a woman of 45 who is in the same job for 15, and only when another person is placed in the position of leadership that should be hers, she realizes that needed a upgrade in her life.
In a lucid moment, she quits and decides to spend 6 months traveling by car.
But she wanted a company and for that, she puts an ad in the newspaper.

Several people respond to her ad and Zeke Powell ends up being chosen.

Zeke is a man of 35 years old, coming from New Zealand who works as a "freelance multimedia developer". Would it be a most charming name for writer/blogger?

Anyway, Zeke was writing about women in midlife crisis and Manny's ad came at the right time.
Over the coming months they would share a car, traveling to places sometimes not so strange, but the best thing would be to inner discovery.

Manny was actually facing a midlife crisis, having friends with their families formed with children or careers that gave them satisfaction, while Manny's life seemed to be frozen.

Even without the intention of getting involved romantically, Zeke and Manny end up becoming more than fellow travelers and both of them return to their homes totally different as they were before...

The book is fun and reflective. I loved the characters and the pace of the story. I just think that the cover could be a little better.

Victoria Bernadine (a pseudonym) is, as the saying goes, a “woman of a certain age”. After

twenty-something years of writer’s block, she began writing again in 2008.

Victoria enjoys reading all genres and particularly loves writing romantic comedy and post-
apocalyptic science fiction. What those two have in common is anybody's guess.

She lives in Edmonton with her two cats (The Grunt and The Runt). A Life Less Ordinary is the

first novel she felt was good enough to be released into the wild.