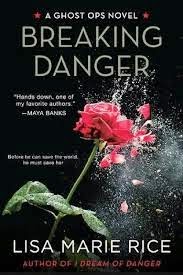 Haven, a community of misfits and geniuses, is one of the few safe places remaining in a world on fire. Run by the Ghost Ops team, three dangerous, fearless, soldiers who were once betrayed and disgraced, will fiercely protect their country and the women they adore from a deadly plague that has turned people into violent monsters.Beautiful brilliant Dr. Sophie Daniels is trapped in her home with the only antidote to the plague. Former Ghost Ops elite operative Jon Ryan is sent on a suicide rescue mission, brutally fighting his way to her side. Together they must cross treacherous terrain before they can return to Haven, but for them to succeed Sophie must trust this tormented soul and place her life, and her heart, in his hands.Years of combat training has prepared Jon for this moment-unafraid, nothing is too dangerous now that he's found Sophie. He will risk everything, fight anyone, for her and a future filled with hope and love.

He was beautiful. That was the only word for it, yet it was the wrong word.
Beautiful because his features were pure Nordic-god perfect. Ice blue eyes, sharp high cheekbones, straight, narrow nose, sculpted jaw, firm full mouth. That gorgeous face framed by longish sun-streaked blond hair. If not for the lines of stress bracketing his mouth, the weather-beaten skin, and the crow’s feet around his eyes, he could have been a Calvin Klein model. But beautiful couldn’t be used to describe a man whose face wore that expression of grim awareness, of unspeakable weariness.
Beautiful also didn’t cover his extreme . . . maleness. Few men nowadays didn’t color their hair, shape their eyebrows, laser away wrinkles, use moisturizer. The usual enhancements. That was what was considered male beauty—someone who worked at his appearance. That wasn’t this man at all. He looked like he’d time-jumped directly from a Viking boat in 1100 AD.
He was beautiful. And hard and dangerous.
And he’d come through hell to find her.
She couldn’t even imagine how he’d gotten here from somewhere in northern California. She’d been at her window on and off all day and hadn’t seen one healthy man or woman. The healthy had deserted the world and left it to the infected. She couldn’t imagine how a noninfected had been able to walk for more than a minute with all the monsters out on the streets, let alone make his way here from far away.
And yet, here he was.
The despair that had gripped her heart eased, just a fraction.
“I thought you were dead,” she whispered, eyes locked onto his. Dead, or worse. The thought had been tearing at her all day. That the man coming to her rescue would fall, and turn. Another tear slipped down her cheek, completely against her will. She wasn’t crying. The stress of the past two days was seeping out of her eyes, that was all. “I thought you would never come, and that I would die here alone.”
Those strong arms tightened around her. What with his weight and his arms crushing her to him, she could barely breathe. She didn’t care. Who cared about breathing when she held life itself in her arms? She thought she’d go out alone, but now she had this amazing man, alive down to his fingertips, strong and vibrant, and she wasn’t alone anymore.
“No,” he whispered back. “I wouldn’t let that happen. I was coming for you. Nothing could stop me.”
Their eyes met and held. His eyes blazed with light and purpose. Beyond the vivid coloring and movie-star good looks, there was something deeper there. Strength, power, determination. Her gaze drifted over his face, the tight features holding back some strong emotion she couldn’t identify.
She was so intent on his face that his words penetrated moments later. Nothing could stop me.
And nothing had.

Continuing the adventure of three soldiers considered traitors by their own country and have developed an alternative self sufficient community, Haven, now is Jon Ryan`s time to show his fighting power .
The best strategist and tracker of the group, also composed by Mac and Nick, have a responsibility to bring safe and sound to Haven the great virologist and Elle`s best friend, Sophie Daniels .
Sophie and Ellen worked together in Arka Pharmacauticals and it was her who prompted Ellen to flee because all scientists from Arka were being captured. Ellen ran away, but Sophie was not so lucky.
Later they discovered that Sophie had managed to escape and still managed to steal the vaccine that cured the plague virus created by Dr. Lee , at Arka`s Lab.

This virus was intended to create a super soldier, but in this place  gave life to a horrible, strong, fast creature, but with no logical reasoning or motor control. They became almost zombies. And every infected person could spread the pest to many others. The city of San Francisco was besieged  and few people could keep themselves alive.

Jon achieves Sophie and while waiting for the best opportunity to escape, they surrendered an attraction unprecedented in their lives.
The fellowship of days together brought back the past of each. The horrible life of Jon, being the son of a couple of drug addicts and knowing the horror of being totally neglected. And the heavy burden of responsibility to Sophie, who had a unique gift of healing people. Together they held the cure for the human race did not end amid a swarm of destructive beings. And the hope of a future that neither of them had planned...

Lisa Marie closes the Ghost Ops series the best way ever. Mac, Nick and now Jon, showed their firepower and how each found their own heaven.
The dialogues are great, with engaging characters. The pace of the story holds the reader with several passages sometimes romantic, sometimes chilling with so much suspense. Hot scenes old your breath .
Women are a case apart, with their special gifts, plus an above average intelligence.
A remarkable series that will be missed.